The Academy Awards is one of the most awaited events for Hollywood stars, fashion designers, and especially those involved in the film industry. It’s one of the most prestigious awarding ceremonies, so you can probably now imagine the significance of this event not just for actors and actresses but for the entire organization of Oscars, glam teams, designers, brands, and directors.

Many celebrities work with a team of designers, makeup artists, and hairstylists to come up with a striking look on the red carpet. Find out who among the stars made it to the list of the most fashionable in the 2021 Academy Awards:

Zendaya is a 24 years old actress who rose to fame in 2010. She’s one of the presenters at the Academy Awards. For this year, here’s what she chose to wear:

Her stunning cut-out dress is quite similar to this year’s Pantone color, “Illuminating.” Because of what’s going on in this world right now, we all need a bright vibe in every little thing.

She looks exotic, mysterious, and striking with her tightly curled hair. The Bulgari jewelry added to the shining and light theme of her look.

Margot Robbie’s beauty always shines whenever she goes, and the Oscar’s Academy Awards are no exception. Wearing a custom-made Chanel metallic lace mermaid dress, she became a twinkling star in a starless sky.

She looks stunning with an elegant up-do with her caramel-colored hair and form-fitting Chanel dress. She has the aura of a royal with her exquisite beauty.

Carey Mulligan is a British actress who has received multiple awards and nominations from prestigious organizations.

For this year, she didn’t fail to showcase a jaw-dropping and head-turning look with her couture gown from Pierpaolo Piccioli’s spring/summer 2021 collection for Valentino.

This is not a mere gown but an art piece, named after their artisans “Debora, Giuseppe, Nina, Paola D.” The embroidery and iridescent sequins took 350 hours to create! No wonder it’s a show-stopping gown, one that’s worth remembering.

Her Cartier jewelry has 1112 diamonds that complimented her hair and dress exceptionally well.

For this year, she chose a soft and romantic gown with a deep V-Neck from Louis Vuitton. Her dress has a lightweight and airy feel to it, making it seem like an angel is walking with a beautiful tulle dress. The gown is stunningly magical in its way.

Laura Dern is an American actress and filmmaker who have won 5 Golden Globe awards. She even took home an Oscar’s Award last year for her role in “A Marriage Story.”

She wore a long-sleeved turtleneck black dress with a full white ostrich-feather skirt by Oscar de la Rent for this year. It looks and probably feels cozy. It’s somewhat eclectic and gives a twist to the usual glitz and glamor. It’s a simple but posh dress, very fitting for an Awards night.

His Brioni gold tuxedo with a pair of black loaders is like the statue of Oscar’s award, very fitting for the event. His wife matched him with a puffy black dress with a high slit by Zuhair Murad and Stuart Weitzman shoes.

Amanda Seyfried is the epitome of a Hibiscus Goddess that evening. She wore a hot red dress from Giorgio Armani. She donned a classic Hollywood beauty’s color to the entire look, with the bold red lipstick from Lancôme

and classic hairstyle. To complete the look for the night, she carried a Roger Vivier clutch.

These celebrity looks are not just for show, but also the appreciation of the excellent masterpieces of their gowns` designers. Showcasing their makeup and hairstylists’ talents and donning creations of outstanding designers for a significant awards ceremony can make us appreciate the finer things in life. 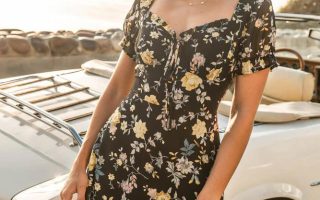 Spring Dresses That Belong in Your Closet